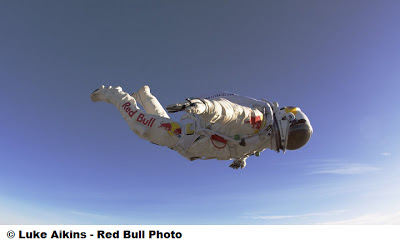 ROSWELL, N.M. - And we thought this was just the beginning.. On Sunday, Austrian Skydiver Felix Baumgartner (43) did the seemingly impossible, he jumped from a helium balloon into the stratosphere. As the first human ever he broke the sonic barrier.

With exactly 39.045 meters distance between his starting point in space to earth, he set the altitude record for a manned balloon flight, the record for a parachute jump from the highest altitude as well as the one for greatest free fall velocity.

This is a great result and he achieved 3 out of the 4 records he was aiming for. His mentor Joe Kittinger will hold on to the fourth one, the record for the longest free fall which was set by him in 1960. "This one he can keep" Baumgartner said with a laugh.

In an interview right after he safely landed on earth again he said, that during his free fall he was afraid to lose consciousness. He also tried to communicate with his team on the way down but it was much harder to do than expected. After the successful jump he was extremely happy to see his family again.

Now Baumgartner is very much aware of the fact that he wrote history and knows that this achievement can not be topped. Even though he has already made a name for himself through videos of former spectacular stunts as a base jumper, he announced his retirement from extreme sports.

For everybody who wants all the infos and details on how to prepare for a jump like this the daredevil wrote a book called: "Himmelsstürmer - Mein Leben im freien Fall" which will be released in march 2013.

After his career end, Felix Baumgartner reportedly wants to earn his money as a helicopter pilot from now on.
felix baumgartner record space jump stratosphere