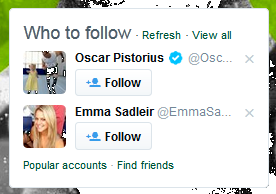 Editor's Note: Today Twitter suggested, I should follow Oscar Pistorius. I happen to find this OUTRAGEOUS! While nobody else was there, when the crime occured, one thing is clear - this man KILLED an innocent person. He killed a person that was young, blonde and full of life, just like me. Not only is his Twitter account still active while he is in jail (and rightfully so) he also gets FEATURED by Twitter?? This can not be happening! What a slap in the face for the family of Reeva Steenkamp. I just recently saw the full documentary 'Why Did Oscar Pistorius Kill Our Daughter?' and was incredibly moved by it. This family has lost their beloved daughter. I do not see why there should be special treatment, for a person that took another humans life away. For example, getting out of prison on bail?!? Excuse me? I also do not see, why Twitter would support such a person. I know money talks, and if I am right, it is suggesting those accounts, that spend money on Twitter to increase their popularity and following. Don't get me wrong I know we all make mistakes. Yes, I bought the wrong dressing the other day - but I did not kill anybody! I also get into an argument once in a while, but I don't get my gun to make a point. I hope this post will somehow get the attention, that leads to an end, of Twitter suggesting I should follow a murderer.