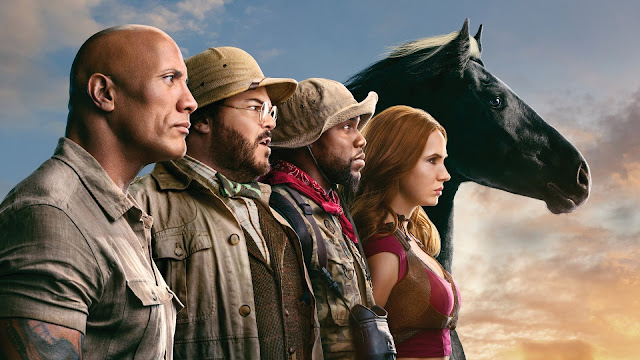 Hey everyone! Get ready for some Movie News! Catch Jumanji: The Next Level in 3D on the big screen if you still can. We recommend it! I first saw this movie at the cinema around Christmas time with my mom and my nephew in Germany and we really enjoyed it! It is an all around family film. When you go to the movies in Germany you get this freshly made, hot, sweet overpriced popcorn which I love. In the US and Canada they only have freshly made salty popcorn. I thought I share this bit of international knowledge with you.😊🍿 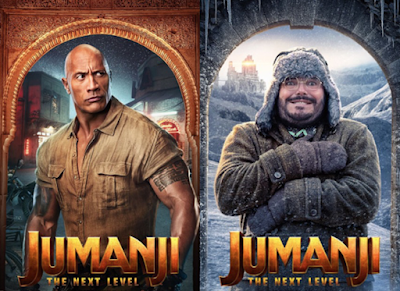 So this movie has everything! Adventure, fun, chemistry between the characters and the type of story you would expect for a sequel including the evil guy, which must be German because his name is Jürgen. Have you ever noticed that the villains in most movies are either Russian or German and the hero's are always American? That is just an observation. When I first found out there will be a Jumanji remake, I was not really up for it because I liked the original a lot. But after watching 'Welcome to the Jungle' in 2017, I changed my mind because it was very entertaining and they had put a lot of effort and some good actors in it.

In 'The Next Level' Spencer decided that life is more exciting in Jumanji world so he made a return to the video game jungle by himself. When his friends organize a reunion and he does not show up, they figure out the only place he can be - is Jumanji. So once again, they get sucked into the game but this time, with the purpose of saving their friend and bringing him back home. Because the game was broken there is an avatar mix-up which is probably the funniest part. We don't want to give away too much because you and your whole family should go and see it! :) Enjoy your Sunday.🍿
3D adventure Awkwafina Dwayne The Rock Johnson family time inspiration Jack Black Jumanji Karen Gillan Kevin Hart The Next Level