March 23, 2022
Hello everybody.
Have you ever been to a country that was so different from your own that it took you quite a while to adjust? Well, this is often the case when Americans make the move to Germany. From language, to food, to shopping and free time activities, you will gain a whole new perspective on life if you discover a new country. Just like in the video above. Recently, I have heard about several Americans, who are in the process of moving to Deutschland/just arrived.
Having lived in 4 different countries myself by now, I must say, really changed my world view. I have gained a different kind of understanding. And what are your younger years better used for, than exploring other cultures and surroundings than the ones you grew up in and are used to? I think you can only grow and evolve from an experience like that. If you like it or not, when you get back home, you have some international stories to tell!
When I moved to NYC I also felt like I was walking around on a movie set constantly, maybe some Wall Street movie, even though it was real life. I also think you are naturally more excited about that thing that is so different from all you have ever known. So the way Americans get excited about the historical buildings in big German cities, I used to get excited about the high tech Apple store in NYC and all the skyscrapers and brand new food options I discovered.
One path for sporty Americans to come to Germany, is to play American Football for a German team in the GFL (German Football League). This is what the young American in the video is doing from now on, just like his brother NALF (also a well-known YouTuber). The name of their team is Schwäbisch Hall Unicorns. Yes this sport is on the rise in Germany since several years now. Check out the first impressions of an American moving to Germany! 😄 Enjoy. 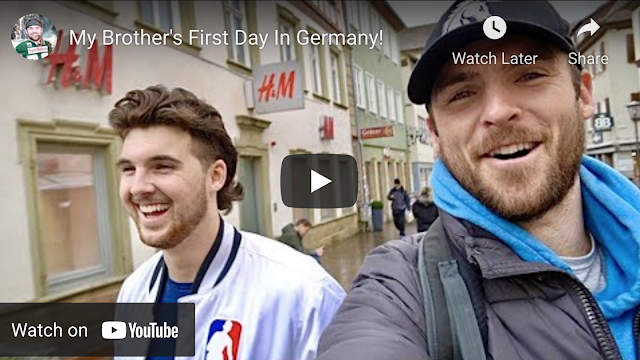